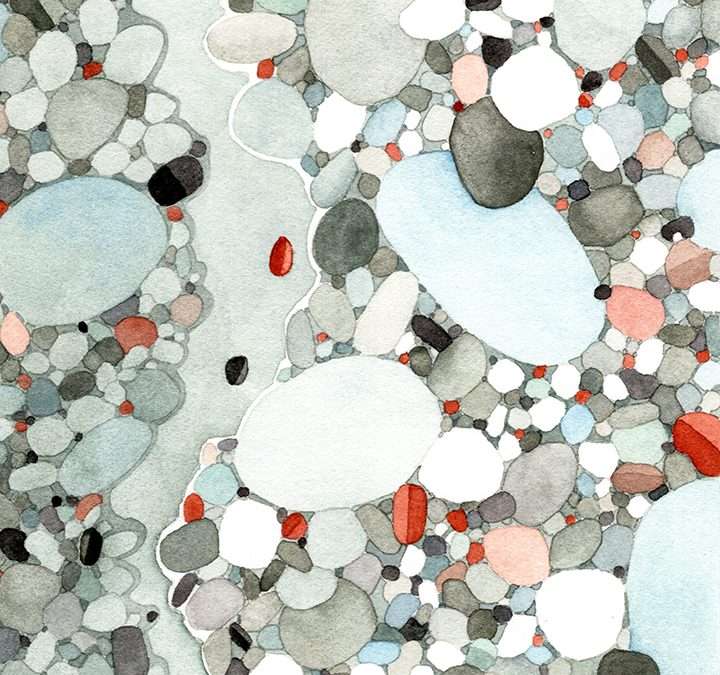 It’s Not A Failure, It’s A Prototype.

I had just spent 3 weeks working on a watercolor based on a photograph I took back in 1982 when I was working as a waitress at Lutsen Resort during my college years. Discovering the photo of a shallow river bed glued into one of my sketchbooks, I must have seen something in how the leaves floated on the water, the arrangement of rocks, and the way the water moved through them enough to make me take a photograph and save it where I did. This would make a great piece to include in my River Divination series, or so I thought.

The watercolor became too brown. I should have stayed with the color palette I established ahead of time. Overall, it was too chaotic with no place to rest the eye. I should have applied my design sense to the composition. Maybe looking back into the past was not such a good idea. This was the second “failed” watercolor of the summer, both of which I spent way too much time on.

Details from the “failed” overly-brown watercolor inspired by the photograph I took in 1982. Upon analysis, here are parts within every piece that turn out relatively okay. © Kristin Maija Peterson 2022.

Since I left my business as a graphic designer in 2020 to pursue fine art full-time, I was having a fairly high success rate in terms of the work. I felt good about what I was producing and it was work worthy of sharing and exhibiting. I had not prepared myself for the flops.

I Am Not Alone and Neither Are You.

I was recently reminded of the “failures” that other artists have made. For instance, when Pope Leo X forced Michelangelo to remove the scaffolding from the first section of the Sistine Ceiling, Michelangelo discovered it was all wrong. The figures were too small and the compositions were too crowded. Shit! I don’t know the Italian equivalent for shit, but I am sure there was a shit-storm. When Cezanne had a bad plein-aire day, he threw the “bad” painting in a tree where it could hang from a limb. Merde! (I do know the French word for shit.) I haven’t gone there…yet. I mean, cursing out popes or throwing paintings into trees. I was also reminded that watercolor paper does have two sides.

The Importance of Play.

How was I to rebound from a string of crappy work? Instead of diving into a new piece, (I’ve got ideas and plans for series work set to keep me busy for at least two years), I decided to give myself some slack and play. Giving myself time to play is a gift. For one, I am 60+ years old. I feel time ticking and that I have finite years left where I can physically paint and create. No time for play!

Stuck between sketchbooks on my work table are small-ish pieces of watercolor paper I’ve saved from trimming down large sheets of 300 lb Fabriano hot press watercolor paper. (My absolute favorite!) I saved them for a reason — to play and play without pressure.

For a while, I’ve been meaning to take a break from the large detailed work and just play using up those 5 x 7-inch watercolor sheets. In the last doomed watercolor (shown above), in the upper left-hand corner, I found a spark. Out of the flop came a little illustrated river story series. These are nothing special or serious, just studies and a perfect way to shake off my feeling of failure.

“River” is both an illustration and story series about a river exploited and dammed, the river suffers and everyone suffers along with it. With the removal of the dam, the river is left alone, regains its health, and soon the salmon return, too.

Back in 2009, I wrote and designed a series of truths, the stuff for creatives, makers, and artists alike to live by. Originally I wanted to make large letterpress posters out of them. While the manifesto enjoys a very small fan base, I have yet to see the series have its day in the sun. Still, the manifesto proves useful for what I have been dealing with. It’s not a failure. It’s a prototype.

I’m also reminding myself it’s why it’s an art practice. Thoroughly dusted off, I am ready and eager to begin again.

YOUR TURN. I would love to hear your thoughts and experiences with failures. How do you deal with failure, artistic or otherwise? What did you learn by failing? Have good things resulted from your self-proclaimed flops? We all learn from one another so do tell in the comments.